If you walked into my house at 6 p.m. today you might think I’m a terrible mom.

You would see me walking around the living room and kitchen, doing minor chores while my almost-two-year-old son follows me around screaming his head off.

It would look for all intents and purposes like I am flat out ignoring a helpless crying toddler who only wants my attention. It would look pretty darn bad. 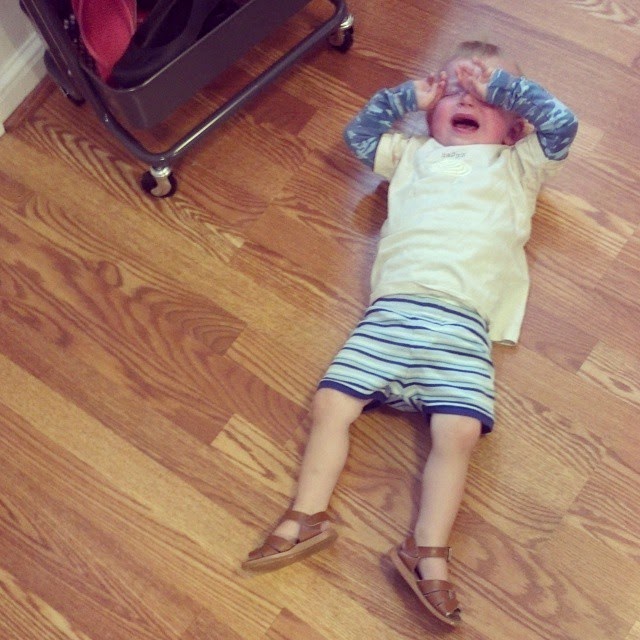 It might look even worse if you dropped by a little later because you’d find my still tear-streaked son in the living room digging dirt out of the houseplants with the television on in the background.

And my daughter sitting at the table watching cartoons on my phone while eating dinner.

Me? I’m drinking a glass of wine and making banana bread.

I mean, who does that? Who really uses the television as a babysitter? Who lets their kindergartener eat dinner in front of Netflix on a weekday evening?

Who drinks wine at 6 p.m. on a Wednesday with their kids in the same room?

Here’s what you didn’t see because you walked in when you did.

Two hours prior, my son started bawling because I wouldn’t let him poke through the fridge.

When I offered him string beans (and they’re really nice string beans) in case he was actually starving (which I knew that he wasn’t) his response was to try to bite me.

Of course, I put him down. But when I saw how upset he was I attempted to pick him up and got a smack for my troubles.

Did he want to be soothed by my hugs and cuddles? No.

Did he want to read his big truck book? No.

Did he want his Oggie or to play trains or a song or anything else except to browse the refrigerator? No.

What he wanted was to poke through the fridge, and after more than half an hour of him kicking up one heck of a fuss, hollering and tugging at me, I finally couldn’t take it anymore. So I opened the door and said, “What in the world do you want?”

He wanted a freaking tortilla. I double checked. I took the package out and asked again. He swore up and down insofar as an almost-two-year-old can swear that what he wanted more than anything else in the world was a flour tortilla straight out of the refrigerator. Cross my heart.

So I gave him one. And he screwed up his little face, resumed yelling at top volume, and threw that tortilla on the floor.

Did he want a tortilla? No.

What I’m thinking about then is that what *I* want is to get in the car and turn it on and turn up the radio until I can’t hear the awful sound of my son expressing himself anymore.

My daughter rolled into the kitchen just then on the stupid trike that has been driving me bonkers all week because I’m constantly this close to tripping over it and said, “You know, mama, it really hurts my ears when he screams like that.”

I’m pretty sure I gave her the stink eye hardcore and consider myself completely justified since he was screaming directly into my ear at that moment.

Just like that, I was done. I have a list and banana bread was on that list and if I didn’t use those bananas today they were going in the trash.

Dinner needed to get made. Life had to go on.

“Guy, do you want to watch big trucks?”

Sudden beautiful gorgeous silence. He looked me in the eye. “Buddy,” I said, “you can watch big trucks but you have to cool your jets. Got it?”

“Ya,” he said in that funny accented voice of his. “Ya. Yaaaah.”

“If he’s going to watch something…” my daughter hollered from her room because she has this magical sixth sense when it comes to things that might not be entirely fair.

“Fine,” I hollered back, having settled my son in the big living room chair with his Oggie to watch Mighty Machines sans sound the way he likes it.

“Fine fine fine. But you have to watch in the kitchen on my phone and when I say you’re done, you’re done.”

And that’s when I poured myself the glass of red.

The point of the story is that you shouldn’t judge the mom that’s in front of you because you’re not seeing her whole story. Her five minutes ago or her two hours ago or even her ten years ago may have shaped what you’re seeing now in ways you can’t possibly understand – or in ways you’d understand all too well if you had a time machine. Until you do, make sympathy (not judgment) your default. It’s the kind of kindness we are all in a position to need from time to time.

One of these days it may be you with the wine glass in hand. And mama, I won’t judge.